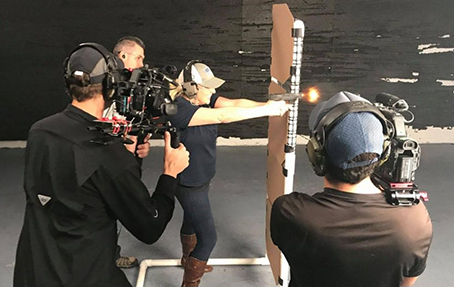 Please check back soon as we are excited to bring you new FRC video range tips. We have included below several informative gun related news items.

FRC in the News:

What’s the best way to become a proficient firearms trainer? Brooke Doiron of FRC Firearm Range and Clothing joins Gun Talk Nation’s Ryan Gresham to share her story on what made her want to become a firearms instructor and the time involved in becoming one. Plus, the two discuss the certifications needed, safety issues and the range, gun selection and more.  View the video here.

BATON ROUGE, La. (WAFB) - A bill that would allow gun owners in Louisiana to carry concealed firearms without a permit is now headed to the desk of Gov. John Bel Edwards.  View the video here.

BATON ROUGE - Gun sales at the Firearms, Range, and Clothing store in Baton Rouge are up more than 50% compared to this time last year. Assistant Manager Manuel Luna says sales spiked at the beginning of stay-at-home orders in Louisiana.”  View the video here.

Keeping guns out of the hands of criminals is our priority. Learn how the National Shooting Sports Foundation®'s initiative, Don’t Lie For the Other Guy (TM), is working to prevent straw purchases and keeping our communities safe. View the video here.

The Baton Rouge Mayor’s Office is teaming up with the East Baton Rouge Police Department and local organizations to provide free gun locks as a part of Project ChildSafe, an initiative aimed at keeping children safe from gun violence. View the video here.

The city wants to make sure gun owners are securing their firearms and have no excuse. .
View the video here.